Back to History & Archaeology

After the construction of Place Royale, the inhabitants of Brussels slowly forgot about the old Coudenberg palace. Nonetheless, many spaces had survived and were used by the companies and institutions occupying the Grimbergen and Bellevue Houses: as wine cellars for the Bellevue Hotel during the 19thcentury, as archive storage rooms for the Lloyds Bank during the 20th… 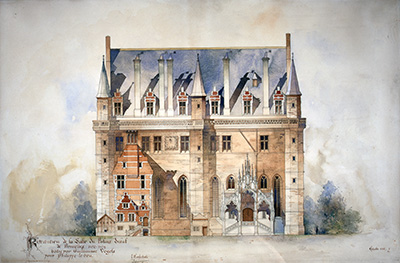 « As long ago as 1894, the Commune surveyed the basements of Grimbergen House. Paul Saintenoy made the drawings at the request of Mayor Charles Buls who was considering a restoration of the Aula Magna of the old palace.

In 1910, the Comité du Vieux Bruxelles looked into the archaeological and historical potential of the site of the old palace under the place Royale and its surroundings. The large site created by the demolition of the block of the former Hospice Terarken and the Jardin des Arbalétriers revealed remains of the first city wall and the Ducal palace, along with the cellars of the Domus Isabellae. It was proposed to prolong the investigations, to carry out excavations and show the remains of the old palace to the public, including the chapel and the rue Isabelle. But the project was not to be.

Over the following decades, research by Paul Saintenoy and Guillaume Des Marez, historians of Brussels, led to the first scientific accounts of the old palace and the place Royale.”

The Brussels World Fair of 1935 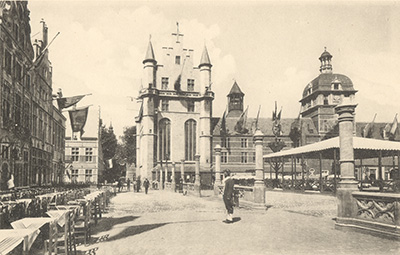 During the Brussels World Fair of 1935, a life-size reconstruction of the early 18th century Court District was installed on the Heysel plateau: the Aula Magna (great hall), the palace entrance porch and the Place des Bailles were the centrepieces of this picturesque recreation. The River Senne and the first walled city enclosure were also included. People in period costume as well as visitors strolled pleasantly around the café terraces.

When work first started on the foundations of the palace chapel and the first part of Rue Isabelle in 1984, few could have imagined what secrets would be revealed!

The first archaeological excavation of the former Hoogstraeten House started in the same year. Almost ten years later, in 1994, surveys were undertaken by the City of Brussels in order to find the remains of the Aula Magna underneath Place Royale. The excavations lasted from 1995 to 2000.

1998 saw the revelation of the palace’s main building underneath Rue Royale. The ruins were covered with a concrete slab and were connected to the Bellevue Hotel for “Brussels 2000”. The former Hoogstraeten House was restored between 2004 and 2008 as part of the renovation work undertaken by the Brussels-Capital Region.

The remains of the palace and the former Hoogstraeten House have successively been listed as monuments in the years from 1984 to 2004.

The opening to the public

Between 1997 and 1999, the site was opened to the public as a place to host special events (exhibitions, Heritage Days…).

Thanks to the new connection between the site and the Bellevue House (todays BELvue museum), finalized in 2000, the public may now visit the remains for themselves, on their own or with a group. The first museographic arrangement with minimal information was carried out. Then a second one, more complete but temporary arrangement was installed in 2004. Finally, a third arrangement, permanent this time, was opened in March 2009.